On Friday, the unemployment rate was reported at 14%! Last week we mentioned that Q1 GDP was negative, my guess is Q2 is on its way to a negative number as well. All of this signals a deep recession maybe even a depression.

It makes no sense but its the world we live in. It’s entirely possible that the actions taking by the federal reserve and congress are going to keep the country out of a deep recession. At least that is what the stock market is showing.

With California and other states easing restrictions this week, we could start to see people get their jobs back. By next week its entirely possible we will be asking ourselves if the recession was canceled.

Chart of the Week

The chart below from Calculated Risk shows just how bad the unemployment rate is and how it compares to previous recessions. 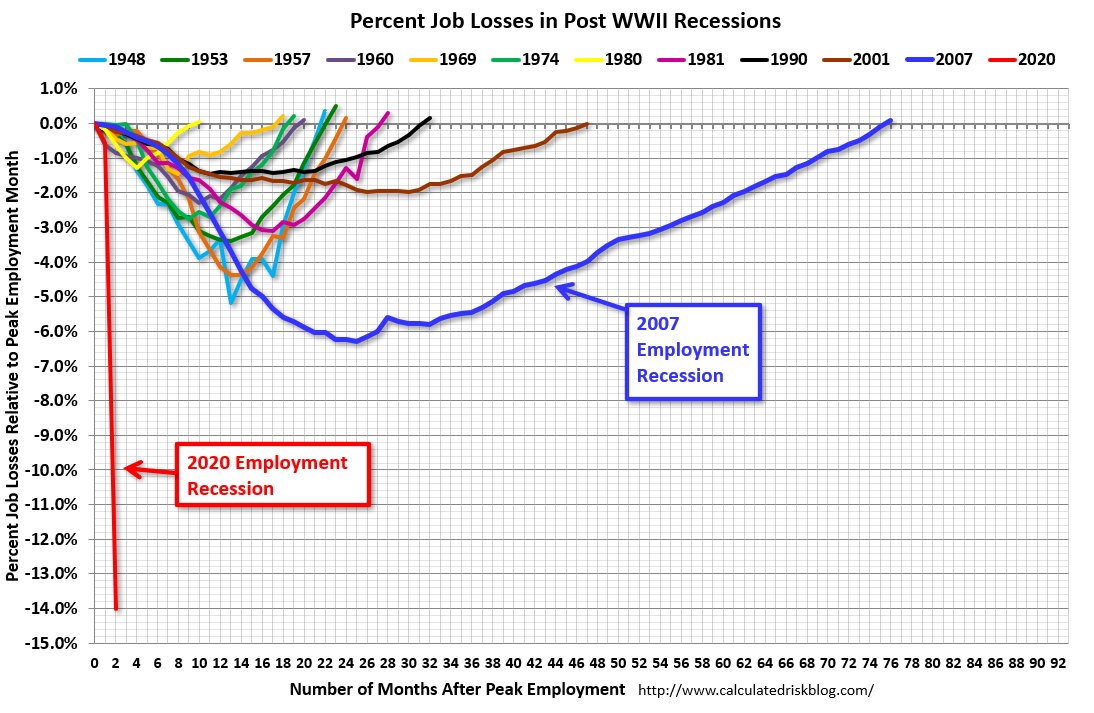 Today California officially moved into Stage 2 of the reopening plan. In this stage, stores are allowed to reopen for curbside pickup. A welcome sign to residents after political pressure from cities, counties, and denizens.

The United States is currently in a race to develop a vaccine with China and other European Nations. The author of the piece, compares the race to the 1960’s when the Soviet Union and the United States were racing to put the first man into space. He predicts the U.S. will suffer a massive blow if we do not develop the vaccine. This is a must-read for flag wearing red, white, and blue Americans

Is It Safe to Visit a Coffee Shop or a Gym? (New York Times)

Great visualization piece by the NYT showing where the virus will spread when the economy is open. At the top of the list are gyms like Cross Fit, Planet Fitness and Yoga studios. This is one of the reasons that stock in Peloton has been surging (Editors Note: Matthew and Joshua own Peloton Stock).

How Technology Is Getting Golfers Through a Pandemic (ESPN)

Josh and I talked about golf on our recent podcast. The two of us played a round last week with some close friends at the country club. The two of us both think golf is going to boom as we come out of the pandemic. While it’s an expensive sport, its one of the few sports you can play that is fairly safe.

Here is a great ESPN article showing our pro golfers and amateurs are keeping their using Flightscope golf simulator in their houses. Another popular option is Flightscope which currently has a 14- week order delay.